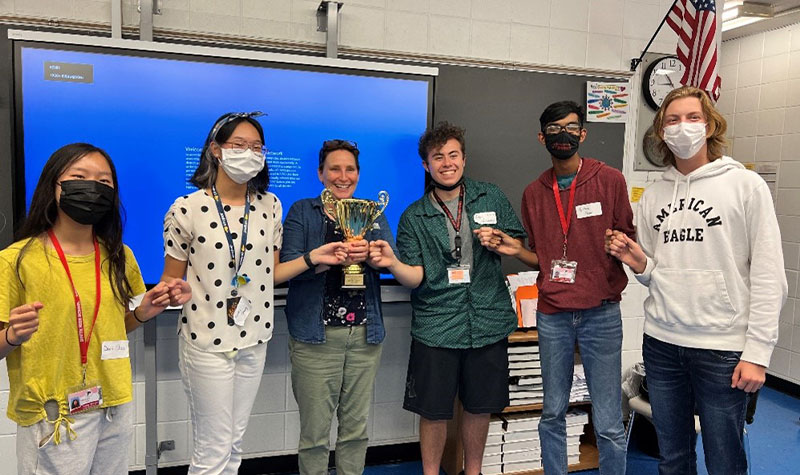 The varsity seniors team—led by team captain Sameer Singh, president Connor Menzies, Syed Ali and Joseph Casey—were lightning fast on the buzzers, coming in with sizzling-fast answers on questions from academic areas ranging from quantum physics to renaissance art and world literature to calculus. The team opened up a commanding 80-15 lead over previously-undefeated Great Neck South in the first round of the final game and did not look back, winning the match 139-112 and taking the championship.

South’s run to the cup also saw them turn aside previously undefeated opponents from Saint Anthony’s High School and South Side High School by scores of 212-110 and 167-121, respectively. The victory was a culmination of years of effort, including weekly multi-hour practices coached by Ross Lipsky.

South’s junior varsity Quiz Bowl team also had a strong showing under the leadership of sophomore captain Ethal Faza, along with juniors Aidan Dombrosky and Kasey Chong, senior Oliver Trzcinski and sophomore Dori Chau. Many of these players were in their first year of competition, but they devoted hours to preparation and practice to become among the best junior varsity players on the island and to learn how to collaborate and perform under high pressure.