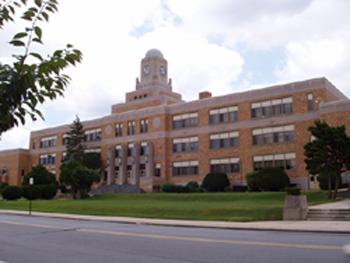 The Opening of Central High School, 1929

The beautiful, imposing, orange-and-cream brick and stone building, labeled “this community’s monument to knowledge” by proud Valley Stream citizens, opened to students in September of 1929. Still in existence from the December 17 dedication exercises is the program booklet which lovingly and proudly describes the features of the new high school and auditorium and lists members of the 1929 Board of Education and faculty.Continuing as principal of Central High School in the new building was “District Principal” Harry W. Gross (1925-41), with W. Clinton Stuart as assistant principal. The faculty numbered 35, with a student enrollment of 298.Soon the new high school was filled to overflowing, and in September of 1935 a system of split sessions was initiated. This practice lasted for 17 years until Memorial Junior High School opened in 1952. For most of these years, the senior high grades 10-12 attended from 8 a.m.-12:30 p.m., and junior high grades 7-9 from 12:45-5:15 p.m.“District Principal” Paul T. Wohlsen doubled as Central High School principal from 1941-46, with Edward J. Kurfess overseeing the senior high and W. Clinton Stuart overseeing the junior high grades. Central’s succeeding principals have been Mr. Kurfess (1946-71), Dr. John E. Glynn (1971-December ’97), Dr. Hildegarde Ziegler (1998-2001) and Dr. Joseph Pompilio (2001-present).The wooden Wheeler Avenue high school building was inadequate for the size of the student body.  The community passed a bond issue for $750,000 in April 1928 for the construction of the present Central High School on Fletcher Avenue.