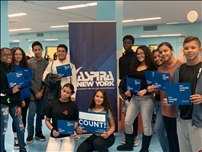 On Saturday, January, 25th, The Memorial Leadership Development Club, led by School Counselor, Mrs. Laura Mesa, attended ASPIRA’S Annual City Youth Conference (CYC), which is held every year to bring the youth in our communities together. This year's theme, Bridging the Cultural Gap, explored looking past the stereotypes and learning who people are, what they do, and why they do it to build new cultural understandings.

The keynote speaker was Chancellor Felix Matos-Rodriguez, of the City University of New York. CYC was hosted by Caridad De La Luz, a multi-faceted performer known as “La Bruja”, who is considered one of America’s leading spoken word poets. This year’s City Youth Conference offered cultural and educational workshops that were centered around diverse clubs that service students from all different backgrounds. Some workshops the students attended were Youth Activism, On Track for College, A Young Person’s Guide to Leadership and Afro-Cuban Movement. We encouraged youth leaders to learn more about the different cultures that surround us here in New York City. By having a deeper appreciation and understanding for each other’s cultures we help bridge the gap that separates us and in turn strengthen as a community. In addition, Jeremiah Cedeño spoke to our students about the census that determines how critical resources and political power are distributed.