A Short History of the High School District

The Valley Stream Central High School District came into formal existence by a New York State legislative provision in 1925. Before that time, elementary school graduates in Valley Stream traveled to high schools in Rockville Centre, Lynbrook, Queens and other neighboring communities to further their education.

The creation of such a district-officially designated as Central High School District No. 1 of the Town of Hempstead – was made possible by a NYS Education Law provision in 1917, legalizing the formation of central high school districts by residents of two or more adjacent elementary school districts. The purpose of the act was to promote the federation of union free and common school districts in the state.

Only five such districts (three being in Nassau County) were created in the state before the law was revoked in 1944 and replaced by a provision for centralization on a K-12 basis. The other two Nassau County central high school districts formed were Sewanhaka and Bellmore-Merrick, both still in existence. The fourth and fifth, in Westchester and Erie counties, have since been dissolved.

Even before the formation of Central High School District No. 1 in 1925, Elementary District 24 began offering a high school education to some of its graduates, beginning in September of 1923 at Brooklyn Avenue School. Principal was C.V. Ryan, with Harry W. Gross hired as an assistant principal and teacher for the fall of 1924.

In September of 1925, after the formation of Central High School District No. 1, a wooden two-story clapboard building on Wheeler Avenue just east of Corona Avenue was refurbished and designated as the high school for the district. 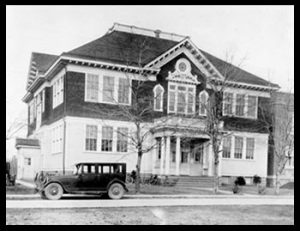 Called Central High School or often “the old wooden school,” this eight-room building had formerly been used as an elementary school in District 13 from 1905 until 1925, when the present red brick Wheeler Avenue Elementary School opened. 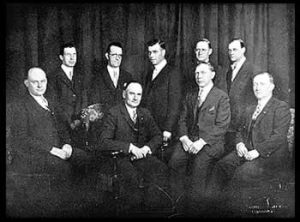 The members of the first Board of Education of the new Central High School District No. 1 were: seated, left to right, Henry Baumann, William L. Buck (President), Herbert Biddulph, Frank Kondla; and standing left to right, William Fare, Albert Dowdeswell, Frank Hendrickson, John Beresford and Walter Van Tassel. Buck Elementary School, built in District 24 in 1952, was named in honor of William L. Buck, who served on the District 24 Board for over 25 years and was the high school district board’s first president. In fact, Mr. Buck served 15 terms as president of the high school district board, covering the years 1925-38 and 1940-42. He was employed as an engineer for the Pennsylvania Railroad and later served as Deputy Sheriff of Nassau County. 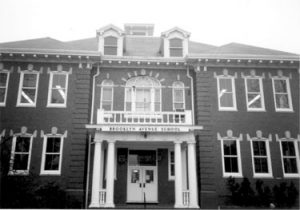 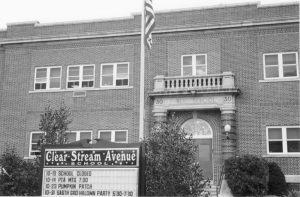