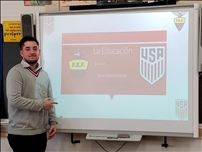 Central High School is proud to announce that its first candidates for The New York State Seal of Biliteracy completed the requirements for this recognition on Jan. 24. Seven students presented cultural comparisons to a panel of teachers and administrators. The presentations, conducted entirely in Spanish, were extremely well prepared and of high caliber.

Students completed a number of requirements for this prestigious recognition. As stated on the New York State Education website, “the New York State Seal of Biliteracy recognizes high school graduates who have attained a high level of proficiency in listening, speaking, reading, and writing in one or more languages, in addition to English. The intent of the NYSSB is to encourage the study of languages; identify high school graduates with language and biliteracy skills for employers; provide universities with additional information about applicants seeking admission; prepare students with twenty-first century skills; recognize the value of foreign and native language instruction in schools; and affirm the value of diversity in a multilingual society.”

Later in the school year more candidates for The New York State Seal of Biliteracy will present their cultural comparisons to the panel. Teachers and administrators are very much looking forward to the work from their students.